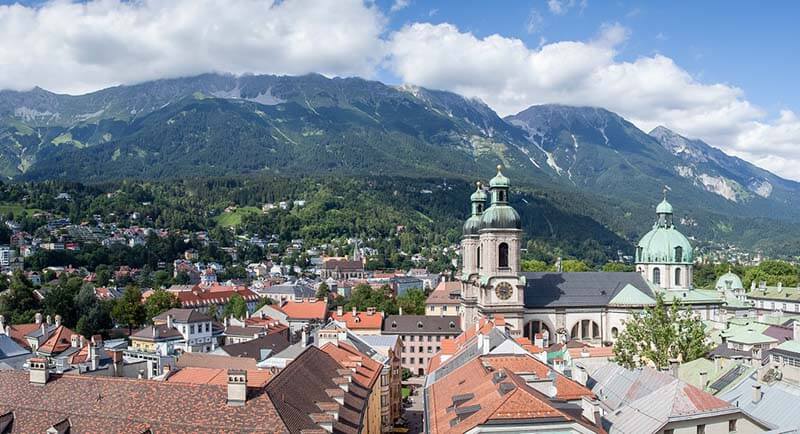 A view over Innsbruck, Austria from atop the Innsbruck City Tower

On a recent vacation in Austria, my family had the unforgettable pleasure of staying in Innsbruck, host to two Olympic Winter Games. A winning combination of picturesque mountain views, quaint streets lined with popular cafes, and historical influence, Innsbruck is surrounded by dramatic, high mountains that are verdantly green in the mild summer months, and cloaked in rich coats of powdery, white snow during the winter. It is impossible not to be moved by the breathtaking sight of medieval and Baroque buildings rising against a clear blue sky, with the majestic Alps framing your view in nearly every direction. Based on our two full days exploring this gem of a city, below I’ve compiled my list of 5 must-see sights in Innsbruck, Austria.

Before we dive into the details of Innsbruck sights, first a few notes. You will find that many people speak a bit of English in Innsbruck, which is very helpful in shops and restaurants. Begin a conversation with, “Guten tag. Sprechen Sie englisch?” (Pronunciation: GOO-ten talk. SHPRAY-hen zee AIN-glish?) to politely wish a person “good day,” and ask them if they speak English. Such niceties go a long way with many locals.

Even during the summer, weather in Innsbruck can vary greatly. In warmer months, plan to dress in layers, and bring along a thin, waterproof jacket with a hood for surprise thunderstorms (I travel with this jacket made by Columbia: It’s stylish, works as an excellent windbreaker or raincoat, and packs quite small). While public transport in Innsbruck is well managed, you’ll want to wear comfortable walking shoes that will fare well on cobblestones and uneven surfaces.

The Golden Roof in Old Town Innsbruck – Image by Ikiwaner [GFDL or CC-BY-SA-3.0], from Wikimedia Commons

Start your morning in Old Town Innsbruck (Altstadt von Innsbruck), and plan to stop at one of the many sidewalk cafes surrounding the famous Golden Roof for a morning cup of coffee and a delicious breakfast strudel. While you enjoy your breakfast, you can admire the view of the famous Golden Roof, a strikingly ornate residence that was completed in 1500 by Holy Roman Emperor Maximilian I, who greatly influenced the spread of the Habsburg Monarchy in Austria. 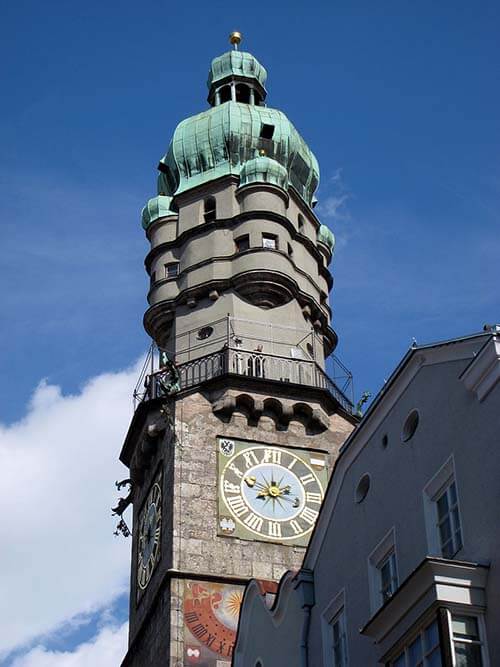 For a panorama of the city, walk a few steps to the City Tower (Stadtturm, a Gothic watchtower dating to the mid-1400s. Climb 148 steps up a winding staircase for stellar views over Innsbruck, including the surrounding mountains, the Golden Roof and Helbling House in the square below, and even the Bergisel Ski Jump in the distance (more on this later!). 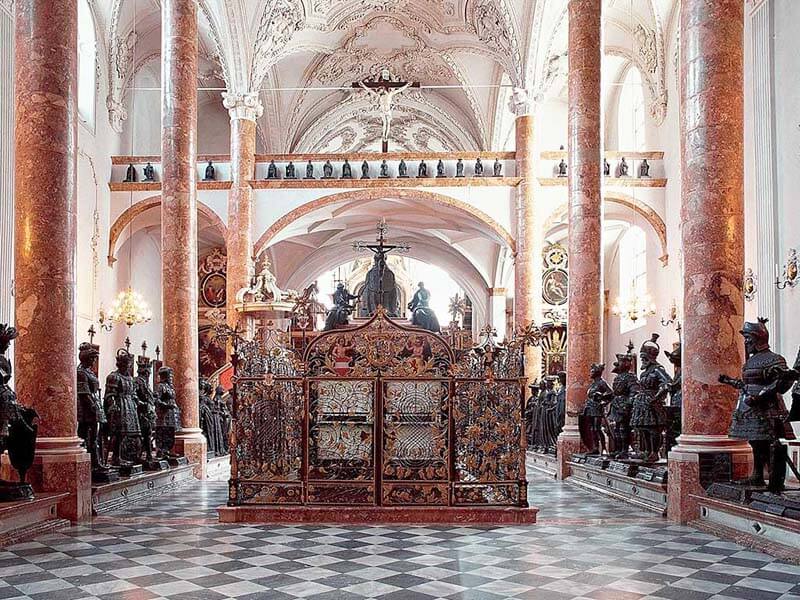 Inside the Hofkirche, looking toward the cenotaph of Maximilian I – Image credit from Innsbruck.info

Now that you’ve had a chance to admire the city from above, walk a few blocks to the Hofkirche, a late-Gothic church commissioned in the mid-1500s to house the remains of Emperor Maximilian I. Here you can admire the magnificent black marble cenotaph (memorial) of Maximilian I, for which the elaborate carvings and ornate scrollwork took more than 80 years to complete. Standing guard around the impressive sarcophagus are 28 large bronze statues of various heroes and ancestors. My personal favorite is the statue of the legendary King Arthur, designed by German Renaissance artist, Albrecht Dürer. 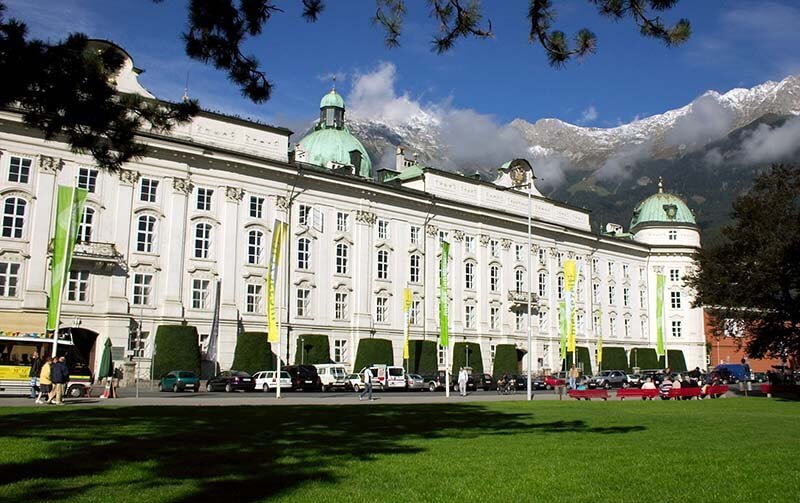 From the Hofkirche, walk to the nearby Hofburg, the Imperial Palace of the renowned Habsburg Emperors, considered one of the three most significant cultural buildings in Austria. Here you will find rooms decorated in the elaborate late-Baroque Rococo style. These include the opulent Giants’ Hall, whose walls are hung with fascinating portraits of Holy Roman Empress Maria Theresa and her 16 children, among others. 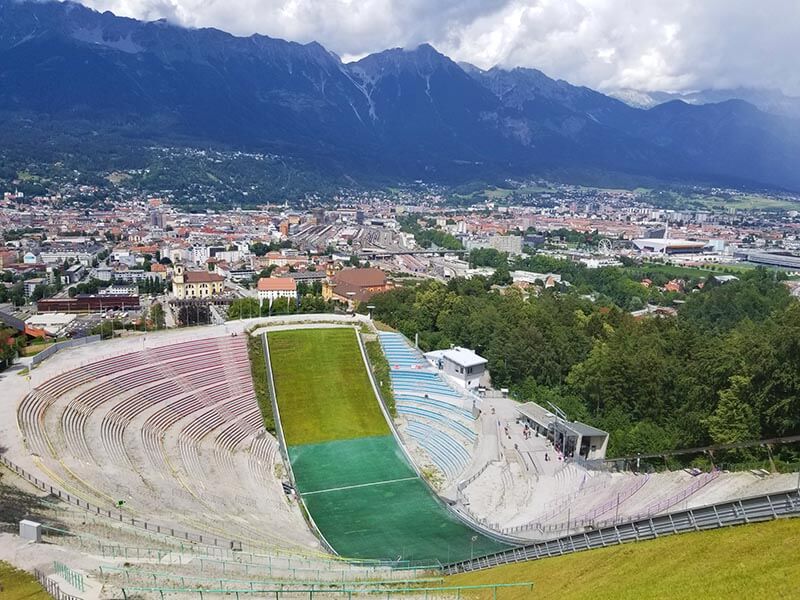 A view from midway up the Bergisel Ski Jump 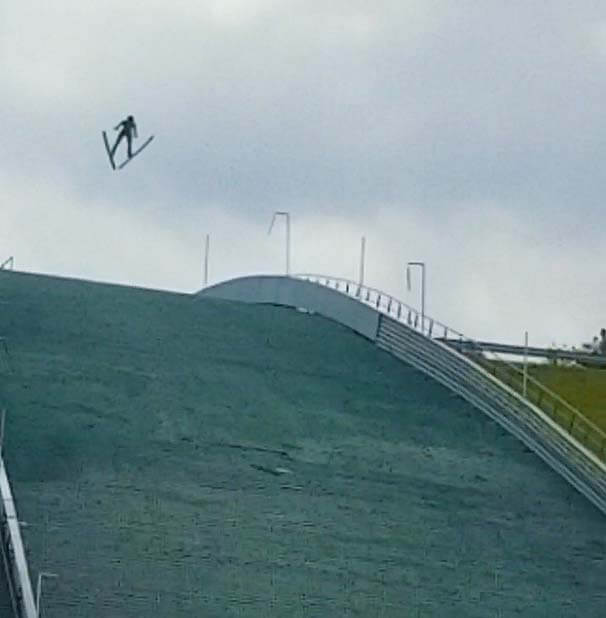 After stopping for lunch somewhere along the scenic river Inn, inquire at a tourist facility about the schedule for the practice ski jumps that take place at the Bergisel Ski Jump almost daily, even during the summer. Then pick up the Innsbruck tour bus, and ride for approximately 30 minutes to the ski jump (you’ll want to exit the tour bus at the Tirol Panorama stop). The first ski jump was built here in 1925, and it has played host to the 1964 and 1976 Winter Olympics. It is exhilarating to watch young ski jumpers zoom at breakneck speeds down the jumping platform, and then to see them soar airborne before landing gracefully at the bottom of the jumping hill. Watch several jumps from the large stadium at the bottom of the arena, and then ride the funicular up to the tower, where you can view the jumps from a very different perspective on the panoramic viewing platform. Watching these young daredevils jump, land, and then ride the funicular back up to the jumping tower to repeat the entire process several times was an unexpected highlight to our time in Innsbruck! 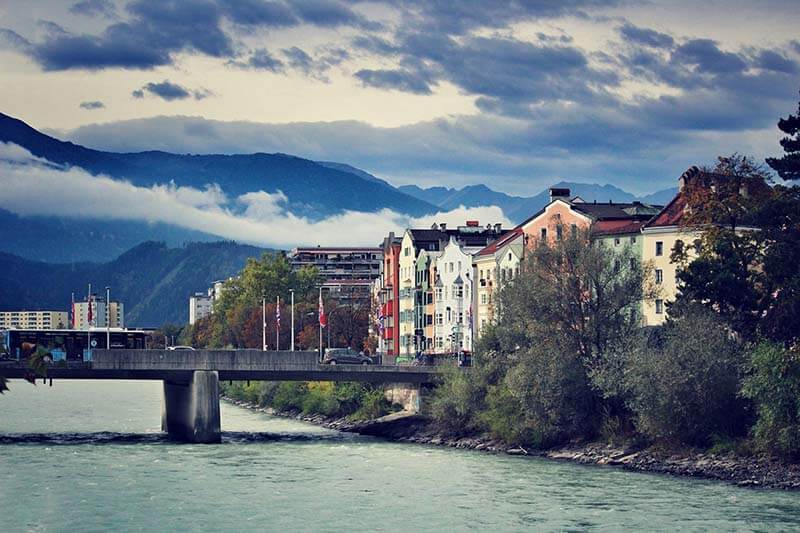 Take an evening stroll beside the beautiful river Inn, after which the city is named.

From the ski jump, you’ll likely want to return to your hotel, where you can unwind after an eventful day of visiting my 5 must-see sights in Innsbruck. After you’ve rested, return to the Innsbruck Old Town for dinner and a stroll along the river Inn, where you can admire the peacefully twinkling lights of the city, and the evening fog as it stretches long fingers over the surrounding hills and mountains.

Now is a perfect time to plan your trip to Innsbruck! I would love to organize all of the details for you, from flights and accommodation, to daily itineraries that will help you get the most out of each destination you visit. Please call me at (732) 613-8640, or contact me here. I look forward to helping make your European adventure a reality!

Jan Mauer
With professionalism and her consistent ability to curate exceptional travel experiences for her clients, Jan Mauer of Exciting Vacations has built her reputation as a Travel Agent who specializes in luxury. Jan has spent more than three decades as trusted advisor to those who require both opulence and exoticism during their world travels. Her expertise about international culture and 5-star getaways ensures that every travel adventure of which you partake is a bespoke experience fulfilling your unique requirements for both luxury and authenticity. Call Jan at (732) 613-8640 or email her here for one-on-one guidance from one of luxury travel's foremost experts.
Tags: Austria, Bergisel Ski Jump, Hofburg, Hofkirche, Innsbruck, Innsbruck City Tower, Innsbruck Imperial Palace, Must-see sights, Old Town Innsbruck, Stadtturm, The Golden Roof, What to do in Innsbruck

Check out our sample
honeymoon itinerary! 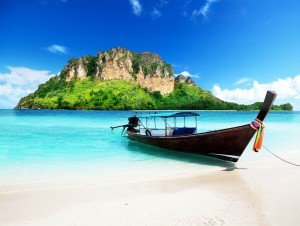