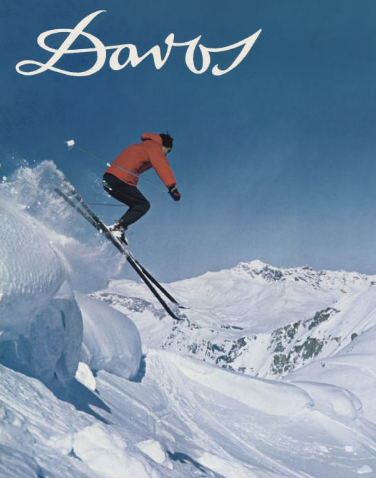 If you live in the northeast U.S. like I do you definitely experience four distinct seasons. Each season has pros and cons, but people around here seem to complain mostly about winter. It’s cold, it can be dreary (if you let it) and that pretty white stuff can cause havoc when driving. I say the best way to get through winter is to get moving! Take up a winter sport, get outdoors and enjoy your winter wonderland! Growing up in the Rockies, I had the wonderful opportunity to learn how to ski when I was young and have been skiing ever since. Of course that means ski trips to incredible ski destinations not only in our country, but to the Alps in Europe as well. One of the most awesome ski trips I ever took was to Davos, Switzerland.

Davos is one of Europe’s most celebrated resorts. It’s linked to neighboring Klosters and especially popular with snow boarders. You fly into Zurich Airport to get there. It is a municipality in the district of Prättigau/Davos in the canton of Graubünden, Switzerland. It is located on the Landwasser River, in the Swiss Alps, between the Plessur and Albula Range. At 1,560 meters (5,118 ft), it is the highest city in Europe. Davos is also host to the World Economic Forum (WEF), an annual meeting of global political and business elites (often referred to simply as Davos) as well as the home of a huge ski resort.

We arrived in Zurich after a short flight from the East Coast and took a motor coach to Davos. Arriving in Davos we saw four huge mountain peaks on one side of the small highway we drove in on and three massive mountains on the other. What a beautiful sight! Like many ski towns, you don’t need to rent a car. The local transportation is extremely efficient! The food served at the local restaurants (fondue, good hearty German fare and muesli to name a few things on the menus) is delicious and it is a quaint and charming town that is easy to get around on foot.

Armed with both downhill and cross country skis, we were ready to get moving and start enjoying the snow! One lift pass included not only skiing on all seven mountains, but transportation via train back to your original starting point as well. The Swiss, like the Germans and Austrians are extremely prompt with everything from train and bus schedules to, dinner reservations. So, it was very important to keep track of time when out all day on the slopes. The best thing we did was hire a ski guide who knew exactly which mountain had the best snow and when to ski it while keeping in mind the return train ride. Not only did we get to ski all seven mountains during our 7 night/8 day stay, but we tried cross country skiing as well. Davos is in a river valley between the mountains and there is a huge open space with a ‘track’ for cross country skiers. This track has defined groves in the snow just as a street has left and right lanes. So, we trekked out to the open field with our cross country skis and got into the groove of these deep tracks in the snow only to find out that we were in the ‘wrong’ lane and other cross country skiers were zooming towards us at an alarming rate! We literally had to fall over into the snow to get out of the tracks so the oncoming cross country skiers could get by us. I never laughed so hard in my life! And last, but not least – the best thing to do after a day on the slopes is to hit the sauna to relax your weary bones.

As a travel professional, I highly recommend Davos, Switzerland to all my adventure clients who want to get the most out of winter.

Jan Mauer
With professionalism and her consistent ability to curate exceptional travel experiences for her clients, Jan Mauer of Exciting Vacations has built her reputation as a Travel Agent who specializes in luxury. Jan has spent more than three decades as trusted advisor to those who require both opulence and exoticism during their world travels. Her expertise about international culture and 5-star getaways ensures that every travel adventure of which you partake is a bespoke experience fulfilling your unique requirements for both luxury and authenticity. Call Jan at (732) 613-8640 or email her here for one-on-one guidance from one of luxury travel's foremost experts.
Tags: adventure vacation, beautiful weather, davos, european vacations, exciting vacations, fashion, jan mauer, jan mower, lavish hotel rooms, luxury destination, luxury destinations, luxury vacation planning, scenery, ski vacation, snow, switzerland, travel specialist